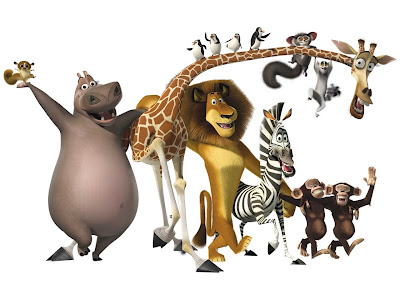 One of our favourite family films is ‘Madagascar.’  Some of you might have seen it.  Alex the Lion, Marty the Zebra, Melman the Giraffe and Gloria the Hippo get shipped out of the zoo and whilst being transported they are swept off deck into the sea.  They wash up on the island of Madagascar.  Once there they eventually meet the island’s population of Leemars and their King who has an announcer called  Maurice who clearly doesn’t like his job or have much respect for the King either!  (Cue fed up look and dead-pan voice) ‘...Presenting your royal highness, our illustrious King Julian the XIII, self-proclaimed lord of the lemurs, et cetera, et cetera, hooray, everybody...’  I think that Christians think Easter is a bit like that...  ‘Jesus has risen from the dead, so what, it happened a long time ago, et cetera, et cetera, alleluia, everybody...’  But, if it really happened all those years ago, then that’s worth shouting about and telling other people.

I think that we can get swept up in the activity and joy of the Easter story - the grief-stricken, awe-struck women, dazzling bright angelic messengers, doubting disciples, curious Peter who goes home amazed... can distract from us focussing on really what’s going on here - the presence and activity of God.

Today, Christians celebrate that God has raised Jesus from the dead.  As contemporary Christians distanced by some 2000 years from this pivotal event in history, you might be hard pressed to distinguish us from those who do not share our faith.  I guess my point is ‘... et cetera, et cetera, whatever, alleluia, everybody...’ is not an option.  For, if what we celebrate during the Easter season and always is true, we cannot be ambivalent about it.

If the events of that first Easter are true and God has raised Jesus from the dead then he has shown all that Jesus did and said throughout his life and ministry, must be true.  Namely, that Jesus really is God’s son, that he was crucified because of our sin (the things we all do and say that let ourselves, others and God down)  and rose again, that he is alive now and we can know him for ourselves.  It also shows that, death is no longer something to be afraid of. It shows us that Jesus has gone before us to prepare a place for us and that (through faith in him) we shall all be raised to life.  It shows that Eternal life begins now, not when we die, that Jesus gave his life for us and that we must give our lives back to him in love and service, and that like the first disciples, the resurrection calls us to be witnesses to the power of the resurrection.  All of this is good news - literally what the bible calls Gospel.

Do we really believe it though?  I think all too often Christians treat what we remember at Easter a bit like Peter did.  We hear the story again, sing the hymns again and at best we stare amazed at all that we hear, and then we go home.

My friends, I believe the miracle God performed that we recall at Easter was not raising Jesus from the dead, but that we have heard the events of that day at all for ourselves!  Friends, in hearing the story again for yourselves as we stand at the empty tomb, I invite you with Peter, to make up your own minds if it is true...

There is evidence for the resurrection of Jesus.  Firstly and most obviously The empty tomb - Jesus’ tomb was empty on Easter Day, despite the guard on the grave.  If Jesus did not rise from the dead, where did his body go?  If the authorities had taken it, they would have produced it when claims about the resurrection were made later.  The disciples were as surprised as anyone by the resurrection. But later, most of them were killed because of their faith in the resurrection of Jesus. Therefore, I think it is impossible to believe that they took the body and told lies.

Secondly, then there are the witnesses.  In the New Testament we have accounts of more than 500 people claiming to have seen Jesus alive.  Their encounter with the risen Jesus changed their lives and they were prepared to die for their belief.   The witnesses not only saw him, they talked with him, walked with him, learned from him, ate with him and touched him.

Thirdly, the Church began.  After Jesus was crucified, the disciples were demoralized and defeated.  They were afraid and denied that they had ever known Jesus.  Only a few days later they were risking their lives to proclaim Jesus as the Messiah.  Their witness was to turn the world upside down.  What event (other than the resurrection) could have so transformed the disciples?

That’s good news!  Friends, whether you like it or not, whether you believe it or not, life is different because of what we remember today.  The angels did not try to convince the women of what they saw and experienced.  They reminded them that Jesus had said it would happen, and told them to go and tell others.  Since that moment, for over 2000 years it has done that.  In every culture, men and women talk not only of having heard the story but of knowing the risen Christ for themselves, today, and in knowing Jesus their lives are made sense of, changed for the better offering peace, joy, love, and freedom from worry and fear.

The miracle we recall today in some senses is not the empty tomb, it’s not even that we have heard the story for ourselves today, but that God offers us changed lives full of peace, love freedom and joy and a relationship with the power behind the Big Bang.  In the face of war, poverty, suffering, injustice, stress, unemployment, the school run - and so on this is still still the church’s message today, it is our churches’ message today - yes even in Mill End and Heronsgate, West Hyde and Maple Cross - interested?
Posted by Fr. Simon Cutmore at 11:23