Living in the Power of the Spirit

There are many great stories that climax with the death or departure of the hero, but the last sections are often taken up with who will be the hero’s successor.  A good contemporary example for me, would be that of Obi Wan Kenobi in the Star Wars films.  Another good example is that of Bilbo in Tolkein’s The Hobbit and at the beginning of his Lord of the Rings Trilogy.  It is this ancient motif that is told again and again in the stories of history.  It’s there in Homer’s writings, it’s also there in the Hebrew scriptures.  It’s characterised by situations where the end of one story becomes the beginning of another.  Thus the hand over from Elijah to Elisha, may be the end of Elijah’s story but it is only the beginning of the 2nd book of Kings where Elisha picks up Elijah’s cloak from where it had fallen as his master was taken away into heaven.

Pentecost feels rather like this.  This is the climax of the whole of the story of the life of Christ, stretching back to where he left the Father’s side to dwell amongst us as a human being.  His birth and life, his arrest and death, his resurrection and his appearances have all led up to his ascension, taking our humanity to be in the presence of God the Father for all eternity.  From on high he pours out on his followers the farewell gift of his successor - the Holy Spirit at Pentecost.  And so the tragic climax of the story of Jesus becomes the hope-filled story of the beginning of the church as the Holy Spirit guides his people to God.  Today is filled with a sense of climax and also of new beginnings.  Today we hear the risen and ascended Christ speak with us and he is with us, his disciples still today, by the Holy Spirit who will continue his work.

The Holy Spirit has featured as the active presence of God in the world since the very beginning.  The Spirit hovered over the waters at the moment of creation.  The spirit, the breath of life, was breathed into Adam by God.  And later it was the same Spirit that confirmed Jesus in his role as Messiah as he was baptized by John.  And of course perhaps most famously, here today the Spirit comes in power to the disciples in the Upper room  The Spirit is given many names or titles in the Scriptures.  He is the Paraclete - literally someone called in to come alongside people and help.  He is the Comforter, someone called in to reassure and provide new strength.  He is the Advocate, someone called in to speak for those on trial either in their defense or to intercede with the judge on their behalf. 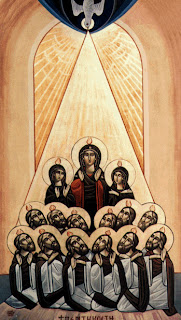 I passionately believe that the coming of the Holy Spirit that we recall today is not just a historical event.  There is no doubt that the Holy Spirit came on those first disciples of Jesus empowering and equipping them to do extra-ordinary things some of which are recorded for us in the book of Acts.  Pentecost is not just a historic memorial in the same way that Jesus’ charge to generations of disciples ‘to do this in remembrance of me’ has made the Last Supper such a crucial and intimate part of meeting Christ for ourselves today.  So this major day in our calendar reminds us of the times when we each intimately meet the power behind creation itself, and the change that he brings into our lives.

Post-Pentecost, in may senses the church has tried to restrain and sanitize the Holy Spirit, shoe-horning him into rites of passage liturgies like baptisms. confirmations and ordinations, telling the assembled that his presence has transformed lives.  The Celtic Christians didn’t try to push the Spirit liturgically around.  They had enormous respect for him.  They saw the holy spirit, not as the peaceful gentle dove that so often comes to our minds, rather they imagined the Spirit more like the wild goose - dangerous and beautiful, flying only where it wants, not to be restrained or captured.

For many Christians, maybe some of us, the Holy Spirit is at worst just a mention in the liturgy, and at best the transforming power of God but somehow in the past.   Today, I am reminded that he is a living and transforming reality, calling and drawing the world to God.

The coming of the spirit on those first disciples of Jesus transformed their lives and revolutionized their faith.  From a group of followers came a group of leaders of the church by the Spirit.  From a group of listeners and learners came speakers and evangelists and teachers by the Spirit.  The Holy Spirit has transformed lives here is similar but maybe not as dramatic ways and you will have your own stories to tell.  I have spoken to a few people in recent weeks who attend very infrequently and they talked openly about how welcome they felt as they came here and of something intangible and indefinable but noticeable amongst us.

The Holy Spirit did not run out on that first Pentecost.  Jesus promised that the spirit would witness to Him, testifying to him and all that he had done said and taught, but the Spirit as Comforter would also stir the disciples to testify to what they themselves have seen and heard.  As Paraclete, he will do for the disciples all that Jesus has done, not condemning the world but offering it salvation through them, calling people to examine their actions and lives and have them judged and transformed according to God’s standards.  The Holy Spirit does not just transform bread and wine into the body and blood of christ at the Eucharist - he changes lives today.

So where does it leave us as churches this Pentecost?  It seems to me that we have a simple choice to make - either we are still excited enough by what God the Holy Spirit did amongst us and is still doing amongst us to allow ourselves to be like the first disciples, empowered by the Spirit, or we’re not.  I believe that God has made that choice for us.  As a church we are equipped and empowered by the Spirit with renewed vision, purpose and faith.  We are ready to write a new page of the history of God’s church here in the communities of West Hyde and Maple Cross, Heronsgate and Mill End.  God’s new mission for the disciples’ began outside the door of the upper room.  So does ours.  Amen.
Posted by Fr. Simon Cutmore at 22:56

Email ThisBlogThis!Share to TwitterShare to FacebookShare to Pinterest
Labels: Pentecost 2012