Due to illness there has had to be some change to our planned pattern of worship on Easter Day.

The new pattern looks as follows:

We apologize whole-heartedly for the confusion and inconvenience that this might cause.
Posted by Fr. Simon Cutmore at 15:19 No comments:

Herewith full details of our worship from Palm Sunday (24th March) through to Easter Day (31st March). Services are open to all to attend. It would be wonderful to see you at some or all of it! 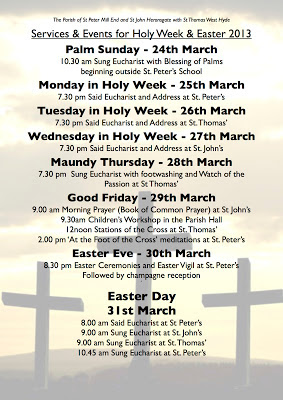 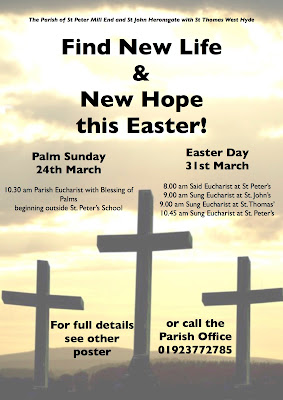 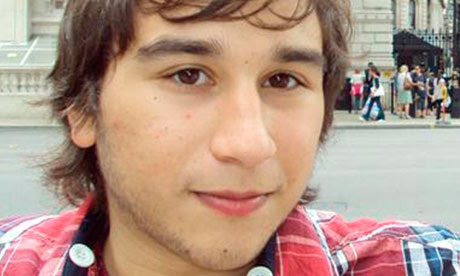 Stephen Grisales had been shopping in Edmonton for his grandmother.  The 21 years of his life were reaching their prime. He was studying architecture.  He always gave of himself, never expecting anything in return.

He was making his way to Silver street tube, when he encountered a gang of teenagers throwing conkers at people with their shells still on.  Stephen, with a keen sense of justice, went and spoke to the gang. The confrontation escalated, culminating with Stephen being stabbed in the heart and left for dead.  A senseless, random attack.  Why God? Why?

Between us we could then begin to tell a tale of tragedy which would take in disaster and disease alike. This tale is one that is told afresh daily in places where the media spotlight shine, but also in homes next to yours but unseen or unnoticed until it is too late. Why God? Why?

But senseless slaying and tragedy are nothing new - what of those Galileans that Pontius Pilate slaughtered? What of those 18 who died in Jerusalem when the tower fell? Why God? Why?

And Jesus is confronted with the finger pointing, chest-prodding, lip curling, head shaking awfulness of it...

For Jesus, there is no causal link between suffering and sin. There’s no divine reward scheme for living well, no Godly loyalty points. Conversely there’s no, ‘you get what you deserve.’ Now He is swimming against the cultural and religious stream here, but also the moral one too.  When tragedy strikes, we want an explanation. Investigations happen. Post mortem’s take place. Reports are written. Lessons are learned.

Those ‘Why God? Why?’ questions go right to the heart of our humanity. They always have and always will.  In those situations we are humbled by our finitude and crushed by our mortality - despite our achievements. We look for someone to blame - and in those moments it is so easy to solve life’s equation like this: God is love. If He is love He just could not allow such heart-wrenching awfulness. There is suffering.  Therefore there is no loving God. QED.

Jesus doesn’t comment on the awfulness of death and tragedy here. He will save ultimate comment on that in action in Jerusalem when He confronts both head on.  Here Jesus reminds us of what we already all know deep down - life is unfair. It is full of random events in which people are cut down in their prime through no fault of their own. But bearing that in mind, that we could be snuffed out at any moment, shouldn’t we take any opportunity we can to discover how to live the time we have right?

The story of the fig tree takes this further.  I am no gardener as I’ve said before, but even I understand this parable. If you’ve invested in a fruit tree, you want it to fruit. Simple! If it does not produce - it is worthless. We had an apple tree in the garden just like that - it was taking up space, it produced next to no fruit - we cut it down.

What is striking about this story is the patience of the caretaker of the vineyard. Give the tree another chance. Give it all the opportunity it needs - tend it, fertilize it, water it, care for it and wait to see. If it still doesn’t produce then yes, let’s get the axe.  If it does not fruit - it is failing to be a fruit tree.

That patient offer to be tended and cared for, to see our lives reorientated through repentance, is available to all people whether we feel we deserve it or not, says God through the prophet Isaiah - whether we are rich or poor, young or old. This is not God offering a spiritual benefit to the working single mother because somehow she’s more deserving. Come and receive the mercy, the love, the forgiveness, the grace of God which He gives freely to all. It costs us nothing, and costs Him everything and through it, rediscover what people are meant to be.

Where is the loving God in the face of tragedy?  He is patiently waiting. He will intervene in the randomness of life... but ultimately in judgement. Now this is where we can get jittery again... How can a loving God judge us?  That’s not fair!  It’s simple though - have we bourn fruit?  A fruit tree that fails to fruit isn some senses is not a fruit tree.  Similarly if we have not been loving, forgiving, giving - and not fed others with that fruit, then in some senses we are not people.  It is on those standards Jesus indicates that we will be judged.

Jesus calls His hearers to repent.  To literally see our lives turned round and oriented towards and shaped by the love of God. To allow our lives to tended and nurtured by His love. To be given another chance...  This is not a vindictive God using tragedy to prod us into faith, but a loving Father, waiting to see how we will use the time we have - whether we will love as we meant to, as ultimately we would want to. Because He loves us...

Where is the loving God in the face of the tragic randomness of life? He is not absent but at the tree - as He was in Eden and again on Golgotha and is again in the New Jerusalem. He is always waiting... Waiting to see what we will grow, what fruit we will bear and how it feeds others... Amen.
Posted by Fr. Simon Cutmore at 22:19