Naming and Shaming and Healing 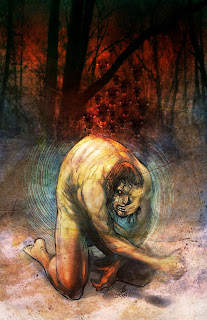 The city of Geresa is to the south east of the Sea of Galilee, in what would have once been an area with predominantly Jewish settlers but by the time of Jesus it was pretty mixed. There was a huge Roman city called Jerash in the area, and presumably the swine mentioned in the morning’s Gospel reading were kept to feed the Romans.

The disciples would probably have been extremely reluctant to go with Jesus to this place. It was outside their comfort zone, the Jewish people were pretty superstitious, becoming unclean if they touched various things like someone who had died, or pigs, or even if they touched a woman during her period. So in a country with so many foreigners it was possible that there were all sorts of horrible things to be fearful of. And in this passage there are the pigs and the demoniac.

The demon shouts aloud ‘What have you to do with me, Jesus, Son of the Most High God?’ The demon in the man proclaims aloud knowledge we take for granted that the disciples had only just begun to get a sense of... that this man, Jesus of Nazareth was more than a Rabbi.

The disciples have been with Jesus a while now and heard Jesus teach about God’s kingdom and love, but in these chapters of Luke’s Gospel, they are beginning to see the power of God at work in him. This encounter stands in a line of miraculous events and teaching in the Gospel - calming of the storm, healing of the centurion’s servant, the raising of the widow of Nain’s son, the forgiving of the sinful woman we heard about in last week’s Gospel reading and the healing of the man with the withered hand. The demon proclaims what has been known in eternity, that Jesus is the Son of God, with the power of God at work in him.

I am intrigued by Luke’s little aside that the man was under guard and bound in chains. This man was as incarcerated as he could be, and yet the demon or the man or both long to be free - the man occasionally breaks the bonds and runs out of the city into the wild - the spiritual realm, the realm of angels and demons. The liberation that the man is offered by the demon is only a pale imitation of what Jesus offers them both.

Another interesting thing to note is that Jesus asks, presumably the demon, it’s name - Legion.

In the Bible, the power to use someone’s name is the power to control or completely understand them. It is interesting that for a certain generation of people - being known by their first names was never an option. It was disrespectful. When I was a child, we had elderly neighbours who lived over the road - I knew their names were Tom and Elmer, but they were always Mr and Mrs Nicholson. Always. In Genesis, Adam not only names all the animals, giving him dominion over them. God himself, when asked his name by Moses replies enigmatically ‘I am that I am.’ So Jesus asks for his name, and the man gives it - Legion. The word Legion means six thousand soldiers, and the man is identified completely by his Legion of demons. In naming the man, the control of Jesus feels like a good thing, like something that is healing and restorative.

The restoration Jesus offers isn’t just psychological or spiritual, as in being healed, the man is restored to his community too. Following the healing the man is seated at Jesus feet - like Martha - sat as one who learns from a Rabbi. The man is healed, but the Greek word is saved, as he also now has a right relationship with God through Jesus.

The people of the town were terrified by the exorcism. In a way I can see why, but on the other hand should they not have been rejoicing? It is one thing believing in God, it is quite another thing to see him in action so to speak it is awe inspiring. It can be terrifying. We would respond in just the same way because our lives are very ordered and distant from a God who is confined to a tidy hour or so on Sunday morning. It is a fearful thing when God steps into our ordered lives and shakes them with His divine presence.

Is this why they sent Jesus away? Possibly, but I suspect that it might have had more to do with economics - they preferred swine to a saviour. Possessions, even at the cost of possession, are more highly valued than this once demon possessed man.

Was this episode a failure? By no means because Jesus leaves behind a disciple who longs to go with Jesus but instead is given a mission - go to your home and tell of how much God has done for you...

Two final thoughts. Firstly, I do believe in demons as spiritual entities in a Biblical sense, but also I believe that demons can be a spiritual expression of the reality of the world. The things we do and say can, as we demonize someone, portray them to be falsely what they are not and give spiritual expression to that by the way that we treat them.  Our lives can be completely consumed, obsessed by, addicted to any number of different things physically but their impact is so often felt spiritually, at our core, in our hearts. This morning’s Gospel reminds us that Jesus longs to liberate us all from the things which bind and possess us whether that’s words, actions, attitudes, politics, habits or substances. God longs to free us to be the people he made us to be - named as his beloved sons and daughters.

Secondly, at the heart of this story is the love of God. God’s love encounters this man in Jesus and sees him transformed. The man is then sent by Jesus with a specific task - ‘Return to your home, and declare how much God has done for you.’ So he went away, proclaiming throughout the city how much Jesus had done for him. Proclaiming the all transforming love of God is not for the a job for the specialists - clergy et al - but for all of us whose lives are touched and turned upside down by Jesus.
Posted by Fr. Simon Cutmore at 07:53