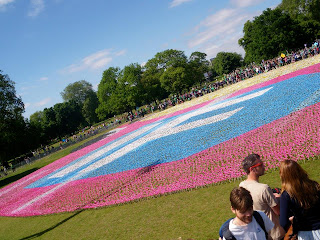 As part of what we did yesterday, we planted some flowers.  Not in the Vicarage garden though, but as part of a huge installation in Hyde park.  With 45,000 or so others, we spent much of yesterday at the Big If rally, calling on the leaders of the G8 nations and especially our Prime Minister to act to end global hunger now by stopping poor farmers being forced off their land by international companies growing biofuels rather than much needed crops; by stopping companies dodging paying taxes in the Developing world so millions can be fed; and by calling for a renewed commitment to giving international aid to help prevent the 2 million children who die each year from malnutrition from doing so.

It was an inspiring, emotional and challenging day and one where I felt at least my voice was heard - calling for political. environmental and social change in the developing world. But it was also an opportunity to my faith into action.

Let’s not kid ourselves that Christianity is not about substantive change. In this morning’s Epistle reading we hear more of Paul’s account for his ministry.

Paul is clear. His call to spread the Gospel was not a political one. He didn’t walk across the floor of the House metaphorically speaking, simply changing sides of a political or social argument. Paul seems certain that Gospel he shares is not about politics - it’s not of human origin or teaching he says - but one he received through revelation from Christ Himself; a reference to what we know as his conversion experience on the Damascus road; an encounter that utterly transformed him and reorientated him politically, socially and theologically.

He reminds the Galatian Christians - previously he was a very zealous Pharisee who’s prime joy was to persecute The Way - the earliest expressions of the Christian church - in an attempt to destroy it. Paul believed that God had already decided to reorientate his life, and that He was to use Paul’s zealousness for His purposes to make the Gospel known not just to the Jews but to the Gentiles too.

And this encounter must have done just that - suddenly Paul went proclaiming this Jesus he was so ardently trying to destroy previously and he set out to spread this Gospel in new places - in Arabia and Syria. If that weren’t evidence enough, later he visited Peter and James - the leaders of the earliest churches in Jerusalem - subjecting himself to their leadership and a prayers.

Paul’s life of persecution and destruction was utterly transformed, and that fervor was was rerouted and used by God to make known His love in Jesus Christ, to those who as yet had not heard - to Jew and now Gentile alike - inviting both to share in the promises of God like Abraham - and together to be blessed by God to be a blessing to others.

Paul’s encounter with God utterly transformed him. It changed his political and theological ideals. And, as we know as we read the accounts of how the church grew through his ministry, his transformation, transformed the hearts and lives of many thousands of individuals and their communities.  As we are confronted again with the issues of global hunger it is possible for us to be transformed by God in these issues.  In an age of compassion fatigue - ‘Enough Food If’ campaign isn’t asking for your money. It’s asking you whether it is right that people go to bed hungry.  Food or lack of it therefore isn’t just a matter of economics but of justice. The Scriptures speak time and again of God siding for the poor. Are we open to being transformed by this God to speak for Him on this issue of justice?

Paul’s encounter with God involved a revealing of Jesus to him. The words that Paul uses actually refer to Jesus be revealed in him. Something happened to Paul on the inside - his drives and motives and ideals were recircuited. The raw material of Paul - his passionate and persuasive personality was suddenly used by God in a new way.  As we are confronted with the issues of global hunger it is possible for us to be transformed by God, so that the outrage we might rightly feel about 2 million children dying each year because of malnutrition, can draw others in.  In an age of a myriad of political slogans - God says in Proverbs 31:8 - '...speak up for those who cannot speak for themselves...' Food, or lack of it, is not a political issue in this respect but a spiritual one. Where manna was given in the wilderness, a crowd in excess 5000 people are fed with 5 loaves and 2 fish and where people are still fed with the body and blood of Christ in bread and wine, God is to be found.  In an age of global hunger - the gospel we can share is not words but bread.

Paul’s encounter with God called him to a new way of living in and for Jesus Christ.  In the account we have of Paul’s conversion in the Acts of Apostles, Jesus actually calls out to Paul, speaking to him personally and commissioning him to a new work for Him. As we are confronted again with the issues of global hunger, we may turn to the sky asking what can I do? As we pray the Lord’s prayer we pray ‘Our Father’, we are called to work together under God as Paul was - called by Him to work together and together with Him in making the Gospel known. We can pray - pray for those around the world who are hungry and pray that they might know justice. We can think - think about how we might share. How is God calling us to be generous to those who have little. How from our great provision can we provide? We can speak out - we can speak out for those voice is so often not heard. You may not feel like going on a rally as we did yesterday but you can join in with the ‘Enough Food If’ campaign through Tearfund or Christian Aid for example, along with the Church of England and many other faith groups and organisations - to make the voice of the voiceless heard and calling on those who govern us to act justly on behalf of all - Jew and Gentile, rich or poor - so that all may be fed.
Posted by Fr. Simon Cutmore at 21:01