Thankfulness - for baptisms, weddings and funerals (for Remembrance Sunday)

As any Anglican priest will tell you, one of the privileges of parochial ministry is what might be in a throw away phrase termed ‘hatch, match and dispatch.’  It is an honour to help those who come to articulate thanksgiving for the safe arrival of a new life and dedicating them to the God who brings all things into being, to give words to the celebratory love between two people as they commit themselves to each other for the rest of their days, and in a dignified way to acknowledge the pain of a relationship ended by death and to speak and seek hope.

Last week we reminded ourselves that a sense  of thankfulness runs like a golden thread through these weeks of the Kingdom.  As we heard Jesus’ Beatitudes we thought more about a sense of thankfulness for the pilgrim people of God. And on All Saints Sunday, specially the Christian men and women who have heard the call of Christ and who in their ordinary humanity, have been a blessing to others in our journey of faith. It is in their ordinariness that I experience the holiness of God. Through them I continue to see the face of Christ and hear His voice.

Today I am thankful for the church being there at the milestones of life, and in baptisms, weddings and funerals, reminding us of the constant presence of God throughout life, and I encourage you to be too.

Aside from the archaic and maybe even slightly threatening nature of this parable of Jesus - at it’s heart is the story of a wedding. But as anyone will tell you, the time of waiting between fumbling to put the engagement ring on a finger to uttering the closing words of the vow ‘… according to God’s holy law. I the presence of God I make this vow’ can seem intolerably long.  Yet the waiting to wed involves an active waiting with plenty to organise and plan. The privilege of taking a couple’s wedding is meeting a loving couple, establishing a relationship with them, and enabling them to articulate their love for and commitment to each other surrounded by their closest and in the presence of the God of Love, through all things that are to come.

St Paul then brings us to the final stages of life’s dance. Having rejoiced at the enlarging of love as a child is brought into the world - a mystery that induces deep thankfulness in most of us, when our most intimate relationships with others end, we come crashing down.  St Paul, writing to the Thessalonian Christians, speaks of the hope of Christian faith in the face of death because of the Resurrection of Jesus. But as anyone will tell you, the time of waiting between our loved one taking their last breath to the words ‘… earth to earth, ashes, dust to dust…’ can seem intolerably long.  Yet the waiting to commend and commit someone to God involves an active waiting with plenty to organise and plan. The privilege of taking someone’s funeral is meeting with those who mourn, establishing a relationship with them, and enabling them to articulate their love for the person who has died and grief with those who surround them with their love in the presence of God - the Lord of life and death.

Today I am thankful for when the pilgrim people of God - the church - who has helped me to articulate my emotions into words, and walked alongside me as I committed myself to walk with my wife into the future for better or worse, those who rejoiced with us at the arrival of children and consoled us when it gets hard, and who silently wept with us at the death of those whom we have loved as we remember them as we have committed them to God.

The word ‘remember’ literally re-member, means to bring something from the past into the present. It is an emotional act with a strangely physical aspect to it.  As we remember the cost of all war but perhaps this year of all years the human cost of the First World War, and we remember all those who have and continue give their lives in the cause of peace, so we should also remember those who have pilgrimed with us in our life journey.  General Maslov writing at the end of WWII described German children crying as they searched desperately for their parents in a blazing town. ‘What was surprising,’ wrote Maslov, ‘was that they were crying in exactly the way that our children cry.’ After Nazi propaganda had dehumanised the Slavs, Soviet revenge propaganda had convinced its citizens that all Germans were ravening beasts…’

Reflecting on the brutality and inhumanity of Auschwitz, Thomas Merton wrote that in order for something like Auschwitz to happen, ‘…It is enough to affirm one basic principle: anyone belonging to class x or nation y or race z is to be regarded as subhuman and worthless, and consequently has no right to exist. All the rest will follow without difficulty… As long as this principle is easily available, as long as it is taken for granted, as long as it can be spread out on the front pages at a moment’s notice and accepted by all, we have no need of monsters: ordinary policemen and good citizens will take care of everything…’

That is, accepting caricatures of inhumanity can too easily turn ordinary people inhuman. Surely Remembrance must be at least in part about reminding ourselves that other people whoever they are, are not caricatures, not beasts, but other human beings who walk with us in life. These have people children, who cry like our own; who love and commit to love and who grieve at the ending of those relationships by death.  These are women and men, who may be strangers but also could be our friends.

On this Remembrance Sunday I re-member with you those who gave and continue to give their lives in war to maintain our relative peace and long that swords be turned to plough shares and spears turned to pruning hooks and that nation should not turn against nation and not learn war any more as it says in Scripture, but I also re-member all those of God’s pilgrim people - who have rejoiced with us in our joys and weep with us in our sadnesses - including you - those who once were strangers and are now becoming friends as we pilgrim on together knowing the truth of the words of Job revealed in the resurrection of Christ:

“For I know that my Redeemer lives,
and that at the last he will stand upon the earth;
and after my skin has been thus destroyed, 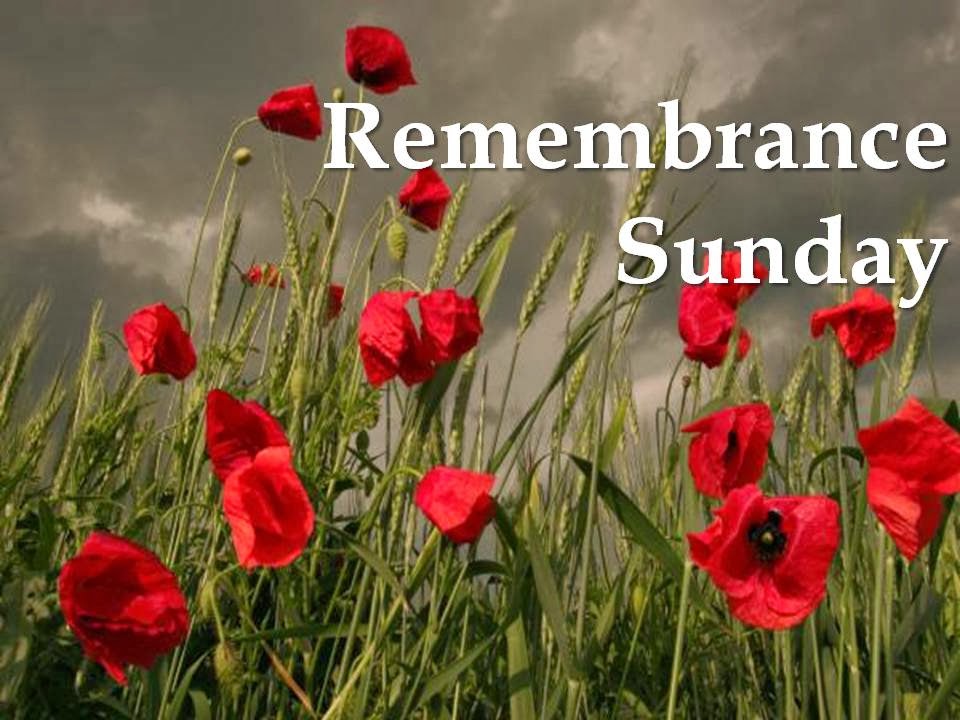 The details of services on Remembrance Sunday is as follows: