Through the written word and the spoken word, may we know your living word, even Jesus Christ our Lord.  Amen. 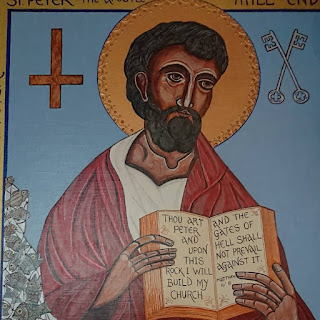 
St. Peter.
Impulsive master of misunderstanding
You comfort me with all your big mistakes;
Jumping the ship before you make the landing,
Placing the bet before you know the stakes.
I love the way you step out without knowing,
The way you sometimes speak before you think,
The way your broken faith is always growing,
The way he holds you even when you sink.
Born to a world that always tried to shame you,
Your shaky ego vulnerable to shame,
I love the way that Jesus chose to name you,
Before you knew how to deserve that name.
And in the end your Saviour let you  prove
That each denial is undone by love.
Posted by Fr. Simon Cutmore at 14:26